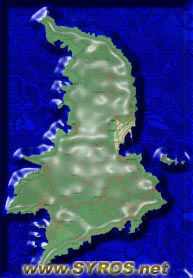 The name Syros probably comes from the ancient name "Sour" or "Osoura" which meant rocky in ancient Phoenician language. Homer mentions Syros island in Odyssey as "Syrii". Archaelogical findings that came to light in the late 19th century at "Chalandriani" site, northeast on the island are thought to be of the 2800 BC era, the second period of the Protocycladic civilisation.

Syros has been the birthplace of ancient philosopher, physicist and astronomer Pherekydes, mid 6th century BC. During these times, 2 cities existed on Syros. One located as today Hermoupolis (Ermoupoli) and more specifically at the Pefkakia-Psariana location and another one at today Galissas (ancient Galissos).

Later, by the 5th to 4th century BC, Syros became a member of the Athenian Alliance and after a short period of tension during the 3rd century BC, Syros thrives again in the 2nd century BC. During the 1st century BC, Syros develops to an important naval hub. For the centuries to follow, Syros is a permanent target of the Pirates and its population decreases significantly.

During the 8th century AD, Ano Syros starts to get built. On 1207 it is conquered by the Venetians, and during the 360 years of occupation, the local people have been converted to the Catholic doctrine.

In 1566, Syros is conquered by the Turks, but during the whole duration of Turkish occupation, Syros is under the protection of France and the Pope himself. In 1617 the Turkish fleet destroys Syros.

During the 16th and until the 18th century, Syros population has been around 2500 Catholic and 150-200 Orthodox Christians.

During the 19th century, Syros had the biggest commercial, industrial and cultural in its history. More specifically Ermoupoli (Hermoupolis), which has been founded by refugess that came from Chios, Smyrni, Psara, Kassos and Crete.

The Catholic influence is limited and Syros contributes financially to the the Greek revolution. In the middle of the century, Syros is already at its peak of economic and cultural development, which last until the end of the century.

The German Occupation, the famine of 1941 and the bombings, destroy the social and economic life of Syros. The attempt to reconstruct Ermoupoli, once again in the long history of Syros, begins after the liberation.