Ermoupoli, capital of Syros Island and of the Cyclades island complex, is founded in 1821 by refugees that gradually arrive on the island from Asia Minor, Chios, Kassos, Psara and Crete. It is given that name to honor the ancient god of commerce Hermes ( 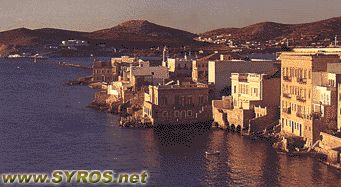 Ermoupoli rapidly develops into a great commercial centre and becomes the most important port of the Eastern Mediterranean. In 1823, the first hospital of modern Greece is founded in Syros. In 1833 it becomes the capital of the prefecture and the first High School of modern Greece is founded by Neofitos Vamvas, a school where Eleftherios Venizelos has been a student. Many shipyards are built, which employ around 2000 people and around 80 ships per year are built there. The first greek steamboat is built in Ermoupolis Syros in 1854.

At the same time, the banking and insurance markets develop. Industry is also thriving with most active sectors being tannage, soapmaking, iron metallurgy, flour industry, textile industry etc. The growing prosperity of Ermoupoli and Syros continues until the end of the 19th century when the population reaches 30000 inhabitants. But the changes that occured in the following years in maritime commerce, shake the economy of Syros and Ermoupoli starts to decline.