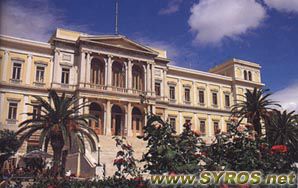 The Miaouli Square, with the statue of Andreas Miaoulis (1889) in the centre and the marble platform for the Syros Philharmonic (1907) showing embossed representations of ancient god Apollo and the 9 Muses.

Syros City Hall. The most imposing structure in Ermoupoli, took 22 years to complete. Its founations were set in 1876 and completed in 1898. The architect was Ernest Chiller and the mayor of Ermoupoli D.Vafiadakis. The Ermoupoli City Hall is open to the public in the morning and sometimes of the year in weekends.

The Cyclades Historical Archive, is found on the first floor of the Ladopoulos building, right on the left of Ermoupoli City Hall. The archives are rich in information as early as 1821 (Greek War for Independence) and they are open to any researcher or visitor.

The Cultural Centre of Ermoupoli is located on the first floor in the building right on the right side of Syros City Hall. In the same building you can also find the Cycladic Art Museum with exhibits replicas of the Proto-Cycladic civilisation. On the ground floor, with entrance from Themidos street, you can find the "Art hall Ermoupoli".

The Public Library of Syros is housed in the ground floor of the Cultural Centre as well. It boasts 35000 books, some of which are very old and rare. In the small terrace in front of the building, there are busts of famous Syros historical personalities Em. Roidis, G. Souris, Dim. Vikelas, Tim. Ampelas, Rita Boumi-Pappa.

The first High School of modern Greece opened its doors in 1833 in Ermoupoli. Eleftherios Venizelos and Petros Protopapadakis have been students of Syros High School. The building is today used by the "University of the Aegean".

The Church of Metamorphosis of Jesus is located at the end of the granite-paved street, around 200 metres to the left behind the Syros City Hall. It was in the terrace of this church, where the first inhabitants of Ermoupoli gathered and officially named the city as "Ermoupoli". The church is rich in icons and relics. In the southern entrance, the grave of Anthimos Gazis (1828) can be found.

The Church of the Assumption (Kimisis) was built in 1829 and is host to the famous icon of "The Assumption of Holy Mary" by El Greco (Dominikos Theotokopoulos).

The building of the Maritime School of Syros can be found by the port next to "Kymata" beach. The first Greek Telegraph Office used to operate there in 1858 and employed 160 people.

The impressive Syros Customs Office buildings and Warehouses by the port have been built in 1861. Now except the customs office , they also house the "Cyclades Picture Gallery" which was founded in 1994.

The Catholic church of Evagelistria, is found at the end of Protopapadaki street and has been built in the early 19th century.

The Apollon theatre was built in 1864 by design of P.Sampo and enjoyed years of glory until the German occupation, when it was almost completely destroyed. In the latest decades, there have been consecutive attempts to restore the Apollon theatre and today it is functional as a theatre again.

The Church of Saint Nicolas, lies just a few metres far from Apollon theatre. The construction finished in 1905 after works of 61 years! It is a magnificent church that every visitor must visit. In the small garden the lies the monument of the "unburied soldier" or "unknown soldier", which is the first monument to be built for the unknown soldiers that fought for freedom. It is a work of the sculptor G.Vitalis (1880). You can also find there the busts of "Rethymnis" brothers, which were the main benefactors for this monument.

The Cemetery of Saint George is located in the Neapoli area. It is separate in 3 parts:

One with the simple gravestones, the second which is still in use today and the third which boasts a multitude of tomb monuments and vaults, small chapels, statues, busts and looks more like an open museum rather than a cemetery. It is definitely worth a visit. If you decide to visit this cemetery, you can also find the Catholic cemetery of Syros and the British cemetery of Syros in walking distance.

The church of Anastasi (Resurrection) is found on top of the Dili hill, which is the right one as we look from the Syros port. The left hill, where Ano Syros lies, has the Catholic church of Saint George on top.

The Quarantine House, is located at Lazareta area and is a huge building constructed in 1837 in order to quarantine the travellers and shipmen that arrived to Syros at times when cholera and other deadly diseases hit Europe. During the Cretan Revolution for Independence in 1866 it was used as a shelter for the Crete refugees and in the end of the 19th century as a prison.